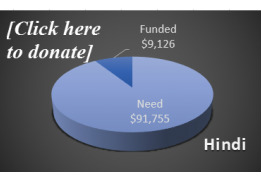 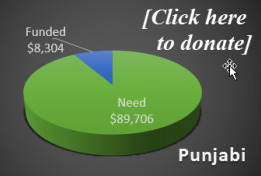 We went to a remote area in the foothills of the Himalayas in Northern India. Women in India have little chance for biblical education in their own language, and so the women in our seminar were joyful and eager to learn about the Character of God. But as we started hearing their stories, we saw just how difficult their lives are.

One woman shared stories of her background in a Hindi home. She had many nosebleeds and then her ears started bleeding. She went from temple to temple wanting to be healed, but in the temples she was told she was cursed through witchcraft. She was without hope until she attended a church and was healed. Her whole family came to Christ because of the miracle of the healing.

Throughout Asia, God is displaying His power and glory in the midst of great spiritual darkness. This woman was saved because of this healing and now she is studying BEE World material so she can share what she learns with her Hindi neighbors.

With its rapidly growing population of 1.2 billion people, more than a dozen major languages, a complex religious and cultural structure, and growing Hindu militant

persecution of the Church, India represents one of the greatest challenges of modern missions today. India’s dominant religion is Hinduism (81%), 12% Muslim, and only 2% Christians. Northwest India has the highest concentration of unreached people in the country. BEE World began ministry in India in 2004, focusing on training Christian leaders in the three Northwest provinces.

We are focusing on the two major languages of Northwest India: Punjabi and Hindi. We have made some progress in both the core courses and in the Women's Ministry courses, but we have a long way to go. We have only two core courses and three WM courses complete. As the need for seminars ramps up, so does the need for more translated courses.